Imessage is one of the best means of sending messages that doesn’t require using the cellular network, other than using a Wi-Fi or a cellular data.

As a newbie, there are major things you should know about the imessage and this includes what does delivered mean on imessage on both iphone and iPad.

On the contrary, delivered on imessage simply means the message has been successfully sent and received by the recipient on it’s iPhone, iPad or Mac computer.

This is what it means, but I will further explain all you need to know about using the imessage to send a message, what it will show after sending a message, and why iMessage delivered not showing after you have sent a message.

What does delivered mean on imessage?

Delivered on imessage means the recipient has successfully received a message sent by a sender on it’s apple device which can be on iPhone, iPad, Apple watch or Mac computer.

What is left is to read the message.

This is what does delivered mean on imessage on both iphone and the iPad, being able to successfully send a message to someone, and the person receiving the sent message.

Once you sent an iMessage and after you saw delivered, you should know that the sent message was a successful one but if reverse is the case, then you got to know that the recipient didn’t receive the message.

After the person has opened or read the message, it will change from delivered to read on your iMessage.

You can read more does delivered go away when message is read.

Aside from the imessage or the ios device, whenever you see the term delivered after sending a message or a text message, it simply means the sent message has been received by the recipient on it’s mobile phone or device.

On ios, it can be received on Mac, iPad, or the iPhone as long as the recipient signed into these devices using it’s Apple account. What I have explained above is the best and simple answer for this question of what does delivered mean on imessage.

If an iphone is off will the message say delivered?

However, in terms of iMessage the message will say delivered if the recipient apple ID is connected to it’s other apple devices and which they are very much active with internet.

You shouldn’t bother as long as it concerns sms text messages, but for iMessages, it will definitely say delivered but only if the recipient apple id is active on other apple products like the iPad, Apple watch, Mac computer.

Once again for sms text message, the answer is no. That is very much impossible and will never happen.

This also goes to sending an message or imessage to an iphone that is switched off. As long as the iPhone is switched off, the message will never deliver and on the sender’s side it will never show delivered until the recipient’s iphone is powered on and active.

Remember if an iphone is on airplane mode and you send a text message to the iPhone, it will never gets delivered because the iPhone is deemed to be offline or switched off because of the airplane mode.

Imessages will go through on airplane mode due to Wi-Fi being active unless the recipient didn’t turn on the Wi-Fi as well or never had an active Wi-Fi. 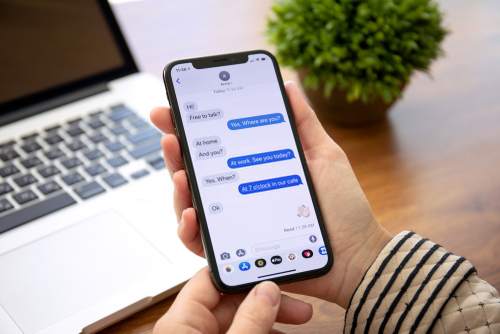 Does delivered mean they got the message?

The term delivered simply means has been sent out and successfully received both in text messaging and receiving products from courier services.

As long as you saw delivered after sending a message or text message, you should know the message has been received by the recipient.

This is what I have be explaining on this post, what does delivered mean on imessage. The meaning of the term delivered on messages.

So whenever you see delivered after sending a message, you should know that the message was successfully sent and received by the person you’re sending the message to.

If you’re sending an sms text message, you will be assured that the person will read the text message after it shows delivered on your mobile phone.

Why iMessage delivered not showing

Imessage delivered not showing may be caused by the recipient phone being switched off, you don’t an internet connection or cellular data, or probably the recipient has blocked you on it’s imessage.

Whenever you noticed that after sending a message delivered isn’t showing u on your iMessage, it simply means the message has not been successfully sent ti the recipient.

In this type of situation I will advise you to try send a message to another contact and see if it will show delivered.

But if after sending to multiple persons but still you’re not seeing delivered on imessage, it may be due to no or poor internet connection or your messages has a bug.

You should clear cache from the messages app, and reboot your iPhone or iPad and check if it will fix the problem.

Will imessage say delivered if phone is off

iMessage may not necessarily delivered if phone is off because the phone is not active, but if the recipient apple id is connected to other apple devices and they are active, iMessage will say delivered.

Your iPhone may be dead flat but you have your apple ID connected to your iPad, Apple watch or Mac computer and which they are active with an internet connection, iMessage will definitely deliver in any of these devices.

If the recipient goes on to open or read the sent message, it will change from delivered to read on the imessage.

All these brings us to the question of the day, what does delivered mean on imessage. Remember, it simply means the message has been successfully sent and received by the recipient on it’s mobile phone.

There’s nothing much to explain on this topic what does delivered mean on imessage, as I have already explained all which you need to know about delivery report on the ios imessage. If you’re still confused anywhere on this post, I’m open to your comments.