Here’s the question of the day, why is my phone charging backwards?

I plugged my phone into the socket, instead of it to charge, it discharges while still on the socket. This very problem is common in mobiles phones and isn’t something new. As you’re having this problem on your phone, I want you to know that you’re not alone in this.

Many people have come across this charging problem including myself. So I’m writing this post why is my phone charging backwards based on my own experience.

Before going on to discuss about the issue, I want you to know that overheating your phone (the battery) is one of the major causes of phone losing battery while charging.

Why is my phone charging backwards

I will discuss the major causes of phone charging backwards, and how you can fix or resolve the issue.

1. Charging your phone while it has heated up.

Heat is one of the major thing that drain a battery, as a mobile phone gets heated up, the battery die a lot faster.

We do make a mistake or charge a heated up mobile phone, and in this case, instead of the phone to charge it discharges. This case has happened a lot to me especially when I was using my old galaxy phone.

You played lots of games, both online or offline, did a lot of browsing, streaming and downloading, and you saw that your battery will soon go flat you immediately plugged it into the socket.

As the phone has already heated up it won’t charge, instead it will discharge even though you’re charging it. Even if it manages to charge, you’ll notice that it will be a slow charging.

As you know that phone heating up is the battery, so how do you expect the battery to charge while it is too hot, that isn’t possible at all. It need to first cool off a bit before it can charge properly.

This is the first reason and answer to the question on why is my phone charging backwards.

Do not charge your phone when it is too hot, maybe after playing online games, streaming online, doing a long video call, etc. First allow the phone to cool off a bit, then you can proceed on charging the phone.

BTW, overheating is one of the major causes of battery damage in a mobile phone.

2. Using your phone and same time charging it

I do find myself doing this all the time, you may think there’s no problem with that until you start having battery issues on your phone.

When i bought my third android phone, I do think there’s no problem using a phone to browse the internet, do video chat on Skype and charge the phone at same time.

I play a lot of online android games whilst charging my phone.

I did for almost two years, and that’s when the problem started. Just like you, I was asking the question on why is my phone charging backwards.

If I plug my phone into the socket for charging, I noticed that instead of the percentage to increase, rather it decreases. If I charge my phone to hundred percent, it discharges to 50% under five minutes.

Sometimes it goes from 100 to 30 percent within ten seconds. I was really pissed off.

What I’m trying to tell you is that one of the major causes of phone charging backwards is using the phone, and same time charging the phone. Problem may not develop immediately but rather on the long run.

The worst part of this very issue is that there’s no solution other than changing the battery. The battery is already damaged, and there’s nothing like repairing it, you need to replace the battery.

This is what I did, I took my phone to a nearby Samsung store and they changed the battery for me. Mind you, it wasn’t done for free.

3. Phone charging backwards because of the charge & cable 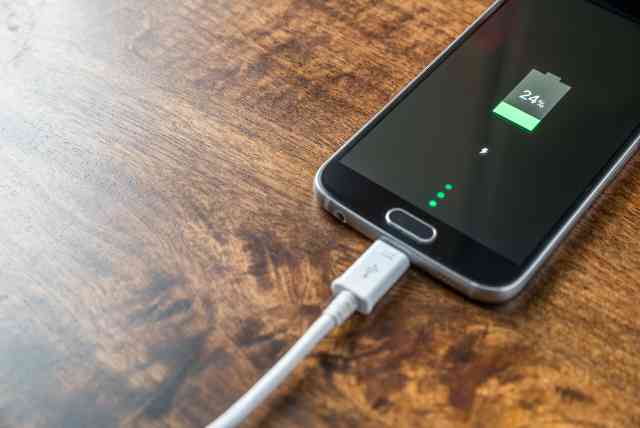 If the problem you’re experiencing on phone charging backwards is caused by the charger or the USB cable you’re using to charge your phone, you’re on the safer side.

Faulty charger or mostly USB cable do cause this problem. If your phone charger got damaged through power surge or low voltage, it can be a lot frustrating to charge your phone with it.

I’m saying this based on my own experience with my LG charger. Power surge partly damaged the charger, though it was charging but very slow. Sometimes, instead of charging my phone it discharges the remaining battery percentage.

This is the same with using a faulty USB cable to charge your phone or maybe using a non compatible USB cable on your mobile phone.

Try to charge your phone using another USB. If the problem persist, that means that the problem isn’t caused by the USB cable. This time use another charge adapter.

This is the last major answer to the question on why is my phone charging backwards, the USB charging. This case is very rare but it does happen, making your phone to drop charges whilst charging.

If you’re not a technical person, it will be quite difficult to find out if the battery problem you’re having is caused by the USB port.

Facing the issue of battery problem and having done all the necessary steps but to no avail, kindly take it to a technician. The technician will easily detect if the problem is caused by your charging port, or probably your phone battery is badly damaged.

what does it mean when your phone is charging backwards

When your phone is charging backwards, it simply means that there is a problem or an issue with your phone battery, majorly caused by a battery problem.

Sometimes it may be caused by the charging adapter or the USB cable, or even the charging port. Mostly it goes down to the phone battery.

When you mobile phone battery develop a fault, phone charging backwards is one of the issues you’ll be seeing or battery dropping from 100 to 30 percent within ten seconds after charging the phone.

To fix this, you need to take your phone to a technician having confirmed that the problem isn’t caused by the USB cable or the charger adapter. In most cases, you will need a battery replacement.

Why is my phone losing battery while charging

Your phone is losing battery while charging because you’re using a non compatible charger or USB cable, your charging port is damaged, or probably your mobile phone battery is damaged.

If you’re using your phone while charging it, and you noticed that the battery percentage is dropping instead of increasing, kindly stop whatever you’re doing and allow your phone to charge complete.

First, close all apps running in the background, unplug your phone from the socket and power it off. Wait for five minutes and power the phone number, then connect it back to the socket. I even prefer to power off the phone while charging it, so as to prevent any activity from occurring.

You can as well turn on the flight mode or turn off mobile network data or Wi-Fi before charging your phone.

All these questions on why is my phone charging backwards, or maybe why does my battery decrease while charging on Android or iPhone are all caused by all these I’ve said so far in this post.

A good phone maintenance help to prevent these issues more especially avoid too much or excessive overheating of your phone. If your phone is heated up, you can turn it off to cool off the heat and afterwards power it on and charge it.

I repeat this again, overheating is one major causes of battery damage in a mobile phone, be it android or iPhone.

I do hope to have answered the question on why is my phone charging backwards. You’re free to drop down your comments and suggestions.