Skip to content
Contents hide
1 Does playing pubg damage phone battery?
1.1 How to reduce battery consumption in pubg mobile
1.1.1 1. Reduce the screen brightness on your mobile phone
1.1.2 2. Remove other apps running in background
1.1.3 3. Lower the graphics and the FPS
1.1.4 4. Disable GPS on your mobile phone
1.2 Does PUBG affect iPhone battery health
1.3 Is it OK to play PUBG while charging?

Here comes the question we have for today, does playing pubg damage phone battery or probably not.

I truly understand the reason why you will see questions like this on the internet, pubg is one heck of a game that heats the battery while playing the game, at a point you may think that your phone will explode.

Seeing question like this isn’t surprising cause I myself do think that way, that maybe playing pubg will damage my phone battery because of the excessive overheating.

I have been playing the pubg mobile game since it was released on mobile in 2018, so I’m writing this post based on my experience playing pubg since 2018 till this moment of writing this post and which may 26 2021.

Absolutely no though one needs to be cautious. Playing pubg doesn’t damage a phone battery irrespective of the fact that it overheats the phones though there’s a way to control or reduce the overheating while playing the game on a mobile phone.

There’s no doubt that one major causes of battery damage in a mobile phone is overheating, as long as the battery keeps getting heated up always, there’s a huge tendency that it will damage in the long run.

Though This is what I usually do back then using my samsung galaxy s9 plus to play PUBG mobile game.

As I started playing the game, it will get to a point where by my phone gets extremely hot that it feels like the phone will explode, I will quickly exit the game, put my phone on airplane mode just for it to cool off. I also noticed that as the phone gets heated up so much, the battery began to drain at a faster or speed rate.

Immediately I noticed this I will quite the game and allow my phone to cool off. I do believe that if I didn’t do that and if this continues to happens every day, one day I might start to experience battery problems on my mobile phone. This is why I said that I truly understand those that pops this question of does playing pubg damage phone battery on the internet cause I myself was thinking the same.

But this is now three years and my phone battery is still intact without any battery issues or damage. Though I must confess that I was very cautious of the overheating and I don’t play the game for than two hours so as to main my phone battery health and to avoid battery problem from occurring.

■ Related Symptoms of cell phone battery dying you should know

So if you have not applied this method, you better do it right now as I’m going to show you how to reduce battery consumption in pubg mobile.

Now let’s proceed to that as well.

How to reduce battery consumption in pubg mobile

Below is how to reduce battery consumption while playing pubg on your mobile phone, and this works for both iPhone and android. 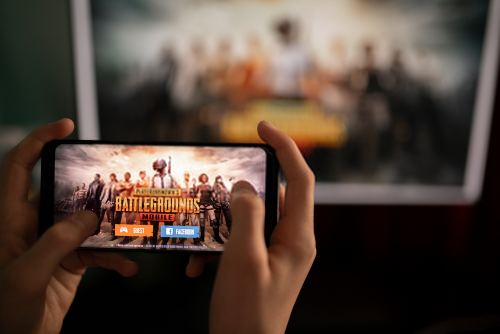 1. Reduce the screen brightness on your mobile phone

The higher the screen brightness on your mobile phone, the higher the battery consumption will be playing the pubg mobile game.

So please try and do this cause it is very helpful and essential, you may leave your screen brightness 30% maximum or low level depending on your phone model.

2. Remove other apps running in background

As pubg mobile game consumes lots of battery, you should try as much as possible to restrict or stop all other apps from running in the background and this also includes the likes of Facebook and whatsapp.

3. Lower the graphics and the FPS

This is very important if you don’t want your phone to gets extremely heated up playing pubg on your mobile phone, try to lower the graphics and the FPS even though you may not get the best of display playing the game.

You should bear in mind that your phone battery matters a lot to you unless you have the funds to be changing phone each year.

4. Disable GPS on your mobile phone

I noticed that playing pubg while my GPS in turned on drains my battery a lot quicker than it should, and I do believe that it isn’t just me having this experience.

I turn off my GPS and maps while playing pubg cause normally my GPS consumes my battery if there’s any active Wi-Fi or mobile data, and this gets worst playing pubg while the GPS and map is turned on.

■ Related How much battery drain is normal in a phone

So please try to disable your maps and GPS in order to avoid excessive overheating of your mobile phone while playing the pubg mobile game. This is very important and you should have that in your mind.

Remember to quit the game immediately your phone gets extremely hot else it might damage the battery on the long run.

PUBG does not affect the iphone battery health but excessive playing of the game while the phone gets extremely heated up might damage the battery on the long run.

I will always continue to say this, one if the things that damages a phone battery is overheating. Once a mobile phone is always heating up every days due to activities on the phone like game playing, one day the battery will start to misbehave.

The phone will take eternity to charge completely and drains faster than it should.

■ Related Why is my phone charging backwards

So please, try and be cautious while playing the pubg mobile game but try and reduce the graphics and the FPS, reduce the screen brightness and apps running in background so as to reduce battery consumption in pubg mobile. This will in turn help to save the battery life and health of your mobile phone.

Is it OK to play PUBG while charging?

Absolutely no, it is not OK to play PUBG while charging the phone. This is one of the things that damages a phone battery life and health especially on a continuous process.

Have you ever charged your phone to 100%and the battery drops 25% under 30 seconds?

Or maybe you plugged your phone to charge and the battery goes from 25% to 100% under one second.

This is one of the things you will see if you continue to charge your phone while playing a mobile game on the game especially if the game requires internet connection.

Once you’re playing an online game which you know that it will hear up your phone, the worst thing you will do is to charge the phone while playing the game. I’m telling you that you’re damaging the phone battery and one day you will start seeing battery problems on the phone.

I’m saying this based on my own experience and I tell you that it can be very frustrating and annoying to the extent of thinking of disposing the phone.

If you really love your phone, don’t even think of playing an online game and same time charging the phone cause what you’re doing is to damage the phone battery.

Looking at the question once again, does playing pubg damage phone battery, the answer is no but you need to take a precaution while playing the game on your mobile phone. Do all the necessary things which you need to do in order to avoid overheating of the phone, and once the phone gets heated up kindly quit the phone and allow it to cool off.

Also limit the number of hours and times you play the game in a day or week so as to maintain your phone battery health.

With all said on this post, this is where I drawn the line on this topic of does playing pubg damage phone battery and also how to reduce battery consumption in pubg mobile game. If you have more to add to this, I will appreciate it a lot.

Get the best tips and tutorials for your tech gadgets like smartphones, computers, portable devices etc.

☆ Tutorial on how to conference call on android

☆ Is it bad to leave your phone playing music all night