One of the best ways to preserve a phone battery is by putting the app to sleep, by doing so the app is restricted from running in the phone background.

For this tutorial, I will be using the samsung galaxy phone, I do believe this works on other mobile phones.

How to unsleep an app mobile phone

On samsung phone, there are two sleep mode features on the phone, and they are;

I will explain how to unsleep an app based on the two sleeping mode features on a mobile phone especially on Samsung phone.

So let’s jump in.

How to unsleep an app on sleeping apps mode

That is to say that the apps won’t send any notifications on your mobile phone as long as they are in sleeping apps mode.

So let’s say you have apps on this very mode, and to unsleep an app, all you need to do open the app or apps on sleeping apps mode on your mobile phone, and by doing so you have automatically remove the app from this mode.

You have unsleep the app in your phone, and the app will immediately start running in your phone background. This is the first method on how to unsleep an app on this mode.

The second method is by opening the settings app, followed by tapping on device care. Tap on battery and app power management, and you will see sleeping apps.

Tap on remove and select the apps to unsleep from this mode, and tap on the remove button. 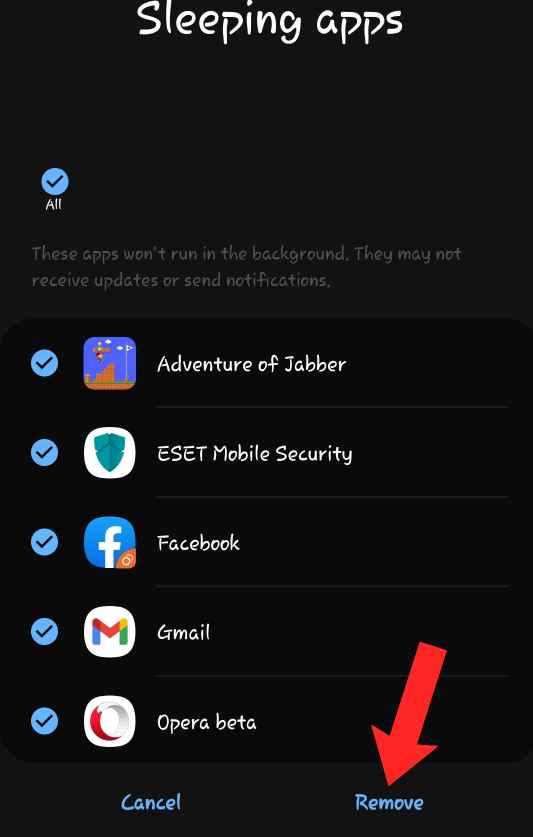 On tapping on the remove button, you have removed the app(s) from the sleeping apps mode. This is how to unsleep an app on this very mode using this second method.

If it is the case of sleeping apps mode, the app is open and will start running in the phone background, receiving updates and sending notifications. While in the case of deep sleeping apps mode the app will still return to mode upon closing the app, so you need to unsleep the app or remove the app from this mode.

How to unsleep an app on this mode?

You start by opening the settings apps, scroll down to device care and tap on battery. This is followed by tapping on app power management and you will see deep sleeping apps. 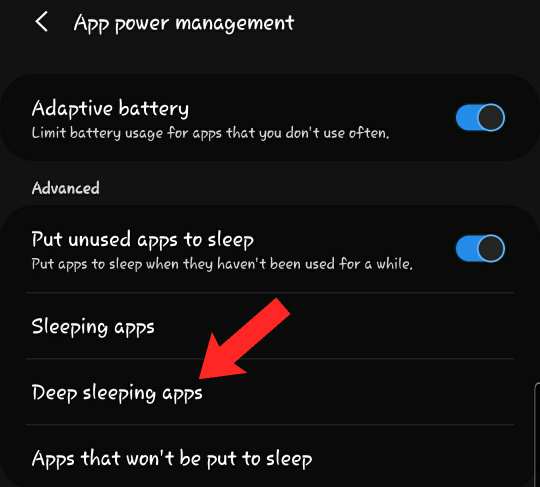 Tap on the deep sleeping apps to open, and all the apps in this mode will display on your screen.

How to unsleep apps on deep sleeping apps mode?

This is how to unsleep apps from the deep sleeping apps mode on samsung galaxy phones.

If you enabled this feature on your samsung phone, it will automatically put unused apps on your mobile phone to sleep. The unused apps are the apps you haven’t opened in a very long time or months.

So all these are how to unsleep an app on mobile phones, probably on samsung galaxy phones cause other phones has theirs as well.

Remember, putting an app to sleep is very essential and helpf cause it helps to prevent or stop the unused app from running in the phone background, and thereby helping to save battery life on the mobile phone.

I do that to the likes of Facebook, Twitter app, Instagram app, online shopping aps, and apps that consumes my phone battery the most except for the likes of Google play services and the play store.

Don’t even dare try to put Google play services to sleep cause it means stopping your phone from functioning as long as you are using an android phone.

So if you have apps that consumes your phone battery, kindly put them to sleep but don’t do that with WhatsApp unless you don’t fancy to receive whatsapp notifications or messages on your mobile phone.

● Don’t miss Quick share samsung: All you need to know

If you need to use the app, you open it and read your messages and check on the notifications. And for deep sleeping apps, the app will return back to the mode immediately you close the app. This is why I prefer to use it than using the sleeping apps mode on my samsung phone.

This is how to unsleep apps on your mobile phone, be it samsung galaxy phone or any other android phone. This feature is very nice and I have been using it to preserve the battery life of my mobile phone.