Apps that won’t be put to sleep on samsung phone, what is it all about and what does it mean. This is what I’m going to explain to you on this post, and to let you know if you need to have your apps added to this feature.

This is one of the features added on samsung phones after launching the Android 10 and Samsung Ui 2.1, and I really like the feature especially the sleeping apps, and the deep sleeping apps mode.

Now let me explain what apps that won’t be put to sleep on Samsung phone means.

What does apps that won’t be put to sleep

This simply means to prevent apps from being added to the sleeping mode on samsung phone or to have apps running in the phone background.

These features helps to prevent apps especially the unused apps from running in the phone background and to save battery life of the phone, but they are different from apps that won’t be put to sleep option.

In samsung phones, when you have list of apps which you rarely use or open on your mobile phone, by default they will be put to sleeping apps mode especially if you activated or turned on put unused apps to sleep.

In order to prevent this from happening and you have some favorite apps which you don’t fancy to be added to sleep mode, you should add some of your favorite apps to apps that won’t be put to sleep on your samsung phone.

This is really what this feature is all about, preventing apps from being added to the sleeping apps mode.

You get started by opening the settings app on your samsung phone, scroll down to device care and tap to open.

Tap on battery, followed by app power management, and right there you will see apps that won’t be put to sleep mode just like on the picture below. 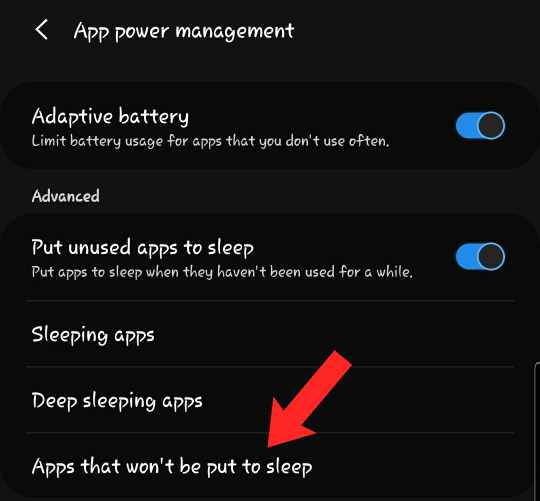 Tap on the mode to open, right there you will ad your favorite apps to this very mode. Now look at the top of your screen and you will see a plus ➕ icon, tap on the add icon and it will display all your installed applications.

Now all you have to do is scroll and select all the apps which you want to add to the apps that won’t be put to sleep mode on your mobile phone. When you’re done tap on the add button below your screen to add the applications.

How to wake up sleeping apps on samsung

Incase you have some apps in the sleeping apps mode and you wish to have them removed from the mode, this is what you need to do.

Once more open the settings app on your mobile phone and scroll down to device care and tap to open. Tap on battery followed by app power management.

You can also press hold on one of the apps and it will give you the option to select more apps, select the apps and look below your screen and you will see remove.

Tap on remove button and it will remove the apps from the sleeping apps mode.

To remove apps from deep sleep mode, you have to follow the above steps but instead of tapping on sleeping apps, you will have to tap on deep sleeping apps. Press hole on any of the apps and select others if you wish to and tap on the remove button.

Does putting apps to sleep save battery?

The likes of Facebook app, instagram, Twitter, etc consumes lots of battery because of the notifications sent by these apps. If you don’t fancy receiving these notifications on your mobile phone, you can put the app into a deep sleeping apps mode and it will definitely save your phone battery life.

If you put the likes of Facebook, instagram in sleeping apps mode, once you opened the apps they will automatically be remove from the mode and will start running in your phone background.

But when you add the apps into a deep sleeping apps mode, once you opened and closed the apps, they will return back to deep sleep mode and will never run in the phone background or sent you any notifications or messages.

I’m telling you that indeed putting apps to sleep mode do save battery of a mobile phone cause these apps functions will be restricted completely. When you have apps added to apps that won’t be put to sleep mode, these apps will run in your phone background.