Deep sleeping apps, what is it all about on android phones or I will say on Samsung phones. If you’re using a Samsung phone, you will definitely come across the deep sleep apps feature unless you don’t really explore your mobile phone.

This feature which is located inside device care is among the essential features which you will see on samsung phone.

Then the question is;

What are deep sleeping apps?

So I’m going to explain what it means, it’s purpose and the benefits derived from this feature.

Deep sleeping apps simply mean apps installed in a mobile phone which functions has been restricted unless the apps are opened by the user. These apps are disabled and will never run in the phone background, receive updates through the play store or send notifications on a mobile phone.

When a mobile phone is put to a deep sleep, you won’t even see the app among your installed apps on the Google play store and this is why I said that updates will be restricted from the app. Everything will seem like when you disable an app in a mobile phone though you will see them in the app manager.

Now listen when you put an app into a deep sleep mode, the app will remain there until you remove it from the deep sleeping apps option. What I’m trying to say is that even if you go ahead to open the app on your mobile phone, immediately you close the app it will return back to deep sleep mode.

So this is what deep sleeping apps means, completely restricting an app from functioning in a mobile phone and this includes the ability to receive updates or get updated from the play store and run in the phone background.

How to put apps in deep sleep

By default, samsung usually put apps that haven’t been opened in the last one or two months into a deep sleep. However, you can also put an app into a deep sleep if you have some apps which you don’t want to get rid of or probably an app that drains a lot of battery on your mobile phone.

So instead of having these apps running in your phone background, you restrict them by putting them into a deep sleep. They will still be installed on your mobile phone, but they are no longer functioning in your phone.

Now let’s see how to put apps in deep sleep.

Start by opening the settings app on your mobile phone, scroll down and open device care. You will see three options which includes battery, storage and memory.

To see deep sleeping apps, you need to tap and open battery. Next you will see where it states app power management just like on the picture below. 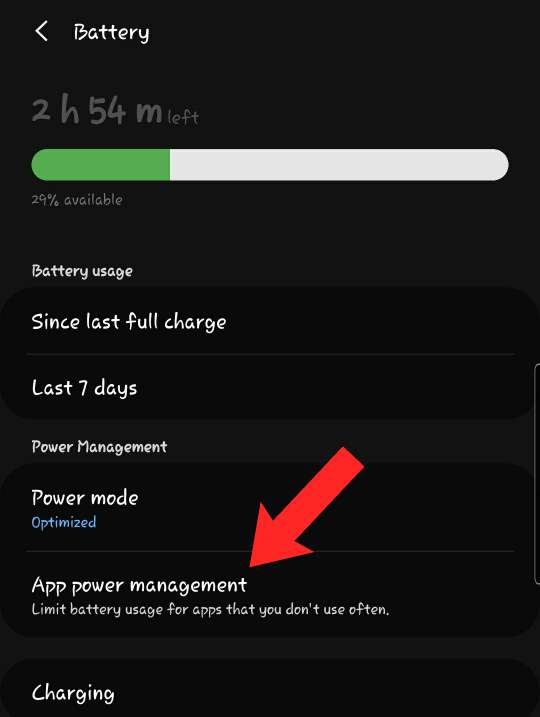 Kindly tap on app power management, and right there you will see deep sleeping apps  and also the sleeping app option.

What we are looking for is how to put apps in deep sleep, you will have to open the option just like on the picture below. 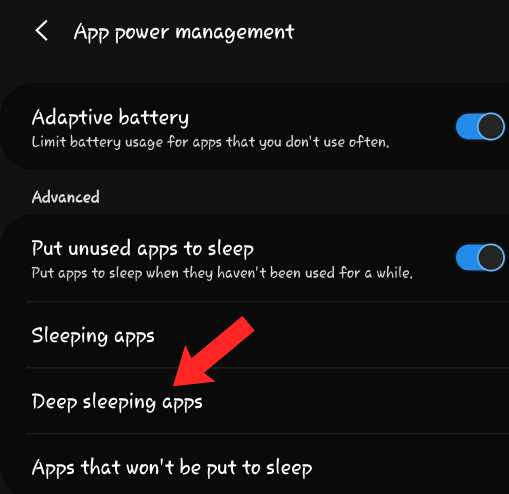 Tap on deep sleeping apps to open the option on your Samsung phones. By default, you may see lots of unused apps inside this option unless you’re the type that do always use the entire apps installed on your mobile phone.

Now you want to put apps in deep sleep on your mobile phone, look at the top of your screen and you will see a plus ➕ icon which is the option to add app(s) to the deep sleep mode in a samsung mobile phone. 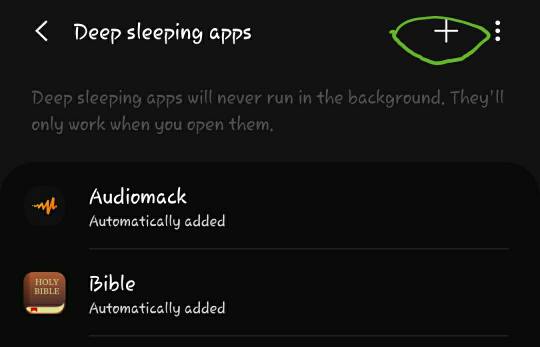 Tap on the plus ➕ icon and on the next screen it will display all your entire installer apps. Tick and select the app(s) that you want to put into a deep sleep, when you’re done look below your screen and tap on the add button.

How do I get rid of deep sleep apps

If you want to remove an app or apps from deep sleep apps feature, all you need to do is to open the settings app, and scroll down to device care.

To get ride of the apps or a particular app, press hold on the app, select the other apps and look below your screen. You will see cancel and remove, tap on remove to remove the apps from deep sleeping apps feature.

The difference between sleeping apps and deep sleeping apps is the fact that in sleeping apps, once an app is opened in a mobile phone, the app will start running in the background, receiving updates and sending notifications.

● Don’t miss Will resetting my phone delete everything

The benefits derived from this

As you have seen the major difference between the sleeping apps and the deep sleeping apps feature, now let me explain the benefits and why samsung added this feature.

The major benefit is to help preserve the battery life of a samsung phone and to avoid battery consumption.

What is the need why you have so many apps running in your phone background while you’re not making use them at that very moment. This is what this feature is all about, to prevent battery consumption by these mobile apps.

How this will be of benefit to you ie to look at the apps that uses your battery most. The apps that runs in your phone background and consumes lots of battery, you will have to add them to deep sleeping apps option.

When you do that, it will restrict these apps functions which includes sending you notifications or messages as they have been blocked on the background. Even if you open these apps, upon closing them, they will still return back to deep sleeping apps option and this will save your phone battery.

What does putting apps to sleep mean?

This means to restrict an app from running in phone background, which helps to prevent battery consumption and in turn, save the mobile phone battery life.