One of the sweetest things one can do on a mobile phone is to use the phone for gaming, this is why you see lots of people searching for the best gaming phone to buy.

Aside from that, questions like does playing games damage Android phone or the iPhone.

There’s no doubt that playing games on a mobile phone can heat up and drain the battery especially if the game is an online high graphics game.

So question like this isn’t surprising cause you and I know that one of the things that damages a phone battery is overheating.

Having played tons of mobile games on my mobile phones, ranging from low end games to games with high graphics, I will explain if indeed playing games the android phone or the iPhone.

The answer is no. Playing games on android phone doesn’t damage the phone even if the games are high graphics games that consumes lots of battery from the phone.

Even if you have a low Android phone, playing games on the phone will not damage the phone, but this is what you should know.

If you’re fund of playing online high graphics games on your mobile phone, there’s a high tendency that the battery will be weakened in the long run.

Let me use pubg mobile game as an example for this explanation.

Of all the high graphics online games for android phone, pubg is the number one in terms of battery consumption.

Playing Pubg mobile game for just only 45 minutes heats up the phone so much, making the battery to drain at a speed rate.

For me, this is not good if this continues to happen always cause you’re gradually killing your phone battery.

I’m not saying that you shouldn’t play the pubg mobile game on your android phone, but rather lower the graphics and the fps in order not to make your phone gets extremely hot  and this is applied to other online games.

One of the major causes of battery damage is overheating, games like pubg, call of duty, etc are high graphics online games which consumes lots of energy from a phone thereby causing the phone to heat up.

Immediately you noticed that your phone is so hot, please save and quit the game and allow the phone to cool off.

Going back to the topic we have, does playing games damage Android phone.

Normally playing games doesn’t not damage the phone or the battery, but high graphics online games can weaken or damage a mobile phone battery cause they will definitely heats up the mobile phone.

On playing a game on your mobile phone and seeing that your phone is extremely hot, please quit the game and save your battery.

Allow the phone to cool off before starting the game for the second or third time in same day.

Is it bad to play games while charging your phone?

Yes of it is bad to play games while charging your phone cause it damages the phone battery in the long run.

Definitely you will ruin the battery health of your phone and will start experiencing battery problems like phone charging backwards, phone taking so long to charge, or battery percentage going to 100 within seconds or dropping from 100% to 10% within seconds.

I’m saying this based on my experience with my second and third android phone as I’m fond of playing games and same time charging my phone.

After one year every seems like a myth and I was like nothing will happen to my phone battery until one day the inevitable happened.

From that moment, I started experiencing battery issues on my phone.

I tried it again on my second android phone just to be sure if truly this is what damaged my phone battery, and same thing happened. Since then, I will never play games while charging my phone.

I noticed this usually occur if you’re playing an online game, with the Wi-Fi or mobile data turned on plus the gaming, it usually heats up the phone.

So in this case instead of the battery percentage to go up, it drops irrespective of the fact that you’re charging the phone. If this continues to happen, you will ruin or damage the battery in the long run.

This isn’t just applied to gaming but other phone functions that requires internet access and consumes battery.

Immediately you noticed that you’re phone is heated up, quit everything you’re doing and allow the phone to cool off before charging the phone.

Is playing games on your phone bad for you 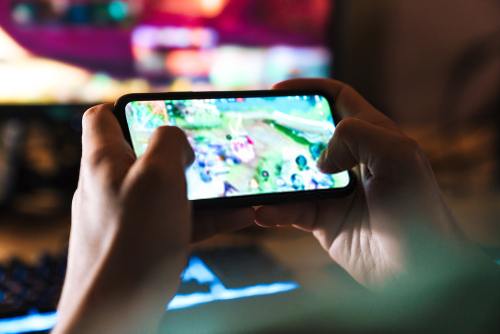 Playing games on your phone isn’t bad for you but don’t overdo it cause it is not good for the eyes and the brain also.

If I play games for hours or six hours without dropping the phone, I see myself feeling bit dizzy and my head will feel heavy and saturated. So I stopped and limited myself to just one hour of game play on my Android phone.

■ Related Symptoms of cell phone battery dying you should know

Now you have the answer to the question of does playing games damage Android phone, it is left for you to decide what you want.