There are several ways of saving battery life of a given phone and tablet, and which includes powering off the phone or the tablet especially when not in use.

So the question we have here is;

Should i turn off my tablet when I’m not using it?

I don’t see the reason to turn off the tablet when not in use, unless the tablet is having a battery issue like battery draining even when you’re not using the tablet.

Aside from that, I don’t see any reason whatsoever to turn off the tablet when not in use, unless you fond yourself in a place where there’s electricity issues.

This is what we are going to focus on, the major reasons that will make you to turn off your tablet when not in use.

Contents show
1 Should i turn off my tablet when I’m not using it
1.1 1. Being in an area where there’s no power electricity
1.2 2. Having a tablet with a poor battery life
1.3 3. You don’t have a power bank
2 Alternative to turning off tablet when not in use
2.1 Is it bad to put your phone on airplane mode often?
2.2 Related Questions
2.3 Should I turn off iPad when not in use?
2.4 Should you power off your tablet at night?
2.5 At what percentage should I charge my tablet?

There’s no need to turn off your off your tablet when you’re using it unless you’re in an area where there’s a electricity issue and your tablet drains so fast even without using the tablet.

However, there are situations that will make someone turn off it’s tablet when not in use so as to preserve the battery life of the tablet.

1. Being in an area where there’s no power electricity

Maybe you went for camping and you went along with a power bank which may not necessarily be adequate for your tablet, you can chose to turn off the tablet when you’re not using it so as to save battery or to avoid battery consumption.

Preferably during the night you can switch off your tablet to save battery.

2. Having a tablet with a poor battery life

Most tablets do have a good battery life but there are some with a very poor battery life especially the cheap android tablets.

Having a tablet with a poor battery can be very frustrating because the battery will be draining very fast, you may find yourself charging your tablet more than six times in a single day.

3. You don’t have a power bank

Asking should i turn off my tablet when I’m not using it in order to save battery, my answer is no because we have the power bank that will be of a good help to you especially if you have a tablet with a poor battery life or battery life.

All you need to do is to get a good quality large capacity power bank that will take you all throughout the whole day before running down.

There are lot’s of them in the market especially the Samsung power bank, Anker power bank and other good quality power bank with large capacity.

Alternative to turning off tablet when not in use

The best alternative to turning off a tablet when not in use is by putting the tablet to airplane mode.

Airplane mode is another way to preserve battery life in a given phone or tablet, and remember not to use the Wi-Fi if your main aim is to preserve the battery.

This will prevent cellular services from functioning and it helps to preserve the battery life of a device and no need asking should i turn off my tablet when I’m not using it.

Is it bad to put your phone on airplane mode often?

However, if you also turn off your Wi-Fi when your tablet or mobile phone is on airplane mode, then it simply means no one will be able to reach you.

But if to say if putting a tablet, mobile phone or a computer on airplane mode causes damage to these devices, the answer is no. The only problem is that no one will be able to reach you through cellular network or other instant messaging apps like whatsapp, Skype, etc.

Should I turn off iPad when not in use?

No, there’s no need to turn off your iPad when you’re using it unless your Ipad has a battery issue which makes it to drain battery very fast.

Instead I recommend you to put your tablet on airplane mode but not very often unless your iPad has no cellular network service but only a Wi-Fi. 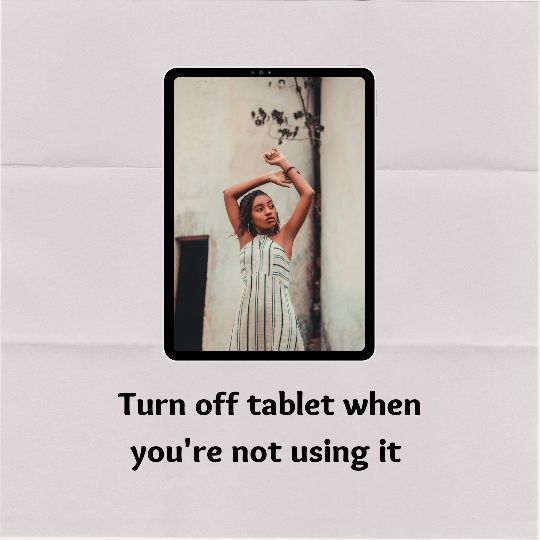 Should you power off your tablet at night?

You can power off your tablet at night though I don’t necessarily recommend it because there are certain things that might warrant our loved ones calling us in the middle of the night.

If your tablet is just Wi-Fi and you have a mobile phone with you, you can go ahead and turn off your tablet at night so as to preserve the battery life of the tablet.

At what percentage should I charge my tablet?

You should charge your tablet when it reaches at least 15% but don’t let the battery percentage go down below 10% as it is not good for the tablet battery life and health.

This is more than six years since I have been using my tablet and I do charge it to 100% without seeing any bad effects afterwards.

I’m saying this based on the number of persons that do advise people not to charge their mobile phones or tablets to hundred percent cause it may damage the battery health and life of the mobile phone or the tablet.

From my own experience, such thong will never happen and nothing but just a myth and that’s all.

This is where I draw the line on the question of the day, should i turn off my tablet when I’m not using it. All in all I don’t recommend you to do so unless you have a poor battery life, but instead enable the airplane mode on your tablet.