You may be seeing the do not disturb iphone feature, and can’t really figure out what it is used for and also how to use it on your iPhone, this article will help you a lot on that.

This feature isn’t applicable to Ios , high end mobile android phone featured the do not disturb feature on their devices as well. But we’re not here to talk about android, but rather the feature on ios iphones.

What is do not disturb on iphone

You can say that it is a feature, found on smartphones be it ios or android that silences calls, alerts, and notifications that you get while your device is locked.

Do not disturb mode is useful if you’re in a meeting, or somewhere that you wouldn’t want to be disturbed with calls, messages or notifications. And this varies on the number of time duration you set it.

Do Not Disturb option on the iPhone stops notifications, alerts and calls from making any noise, vibration or lighting up the phone screen when the screen is locked.

This is to tell you that it works most if your device is locked, and can’t work if you’ve unlocked it.

What does do not disturb do on iphone

Let me repeat myself again especially for the newbies.

Do Not Disturb feature is used on an iPhone whenever a user wants to block any incoming calls, text messages, or other notifications from making his or her iphone to ring ring.

This will be like that based on the number of hours or minutes you set it up. For example, you will have a meeting by 12pm in the afternoon, which phone calls will be prohibited.

Instead of putting the phone completely on silent, you can use the do not disturb feature and set it for one hour based on the number of hours or minutes the meeting will take.

You can use Do Not Disturb by turning it on manually, or schedule it to turn on automatically at certain times of day.

Difference between silent mode and do not disturb mode

The difference between do not disturb iphone and completely putting your iphone on the silent mode is stated below.

One major reason why i like do not disturb on iphone over silent mode is because if you’re in the meeting or event where calls is prohibited, on do not disturb mode your phone won’t even blink to show light or incoming calls, whilst the case is different if your phone is on silent mode.

On silent mode, your phone will show incoming calls, messages or notifications with light on, but wouldn’t ring out.

This is the reason why do not disturb mode iphone is the best especially with the customization than the silent mode.

How to use do not disturb iphone

Having known what do not disturb mode and it’s benefits to the iphone user’s, let head over to activating and using it on your iPhone, be it 11 pro max, Xs Max, Xr etc.

To use it is so easy and no stress about it, all you have to do is to pull the control center, If you have an iPhone X or later like the Xs Max, Xr, Xs, 11 Pro max, 11 Pro, or have an iPad with iOS 12 or later, you should instead swipe down from the upper right corner of the screen to pull down the Control Center.

You will see the do not disturb mode on the control center which is a half moon icon , simply tap on the icon. By doing so, you’ve turned on the feature on your iPhone.

To add extra customization and make it better, press hold on the icon when you turn it on. You’ll comeaacross three options which includes; To enable it for an hour, until the evening, or until you leave your current location.

To customize it by selecting the number of hours or minutes you want it to last, simply go to your settings app and click on do not disturb on your iPhone.

To turn on the schedule on, click on the scheduling mode to turn it on. Look below you’ll see “From To” click on it to set when you want it to start and to end. 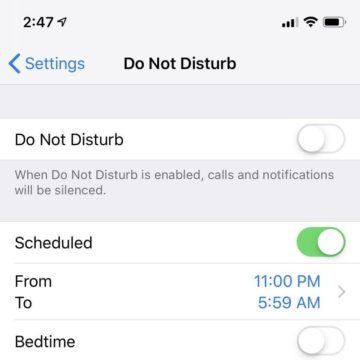 You can select always on silent or when phone is locked, and also select some contacts that you want to add to do not disturb mode.

There are other customization you may like, for example the bedtime mode. If you go to bed by 10pm and awake by 7am, you can set up your bedtime mode from 10pm in the night till 7am in the morning.

Another that i like is the The Phone mode. This lets you decide who the phone will ring through. You can select to allow calls from “Everyone” or “No One,” or only people in your “Favorites.”

For example you activated Emergency Bypass for Mr Charles, if Mr Charles calls or send a message even when do not disturb mode is turned on on y iphone, it will ring out.

If you want a particular contact on your phone to ring out during calls or messages, open thatpperson contact in your Contacts app and click on “Ringtone.” On the Ringtone screen, turn on “Emergency Bypass.” And that is it, you have activated Emergency Bypass for that contact or the person.

Steps on how to put iphone in recovery mode

How to save Iphone Battery With The Best Basic Tips

This is where i wrap it up on do not disturb iphone and what does do not disturb do on iphone. Don’t forget to use the share buttons to share this post.

Get the best tips and tutorials for your tech gadgets like smartphones, computers, portable devices etc.