Will imessage say delivered if blocked: When it comes to the best instant messaging service on both ios and android, aside from whatsapp, imessage is a one of the best to use for messages and I love the fact that it doesn’t compress files like Whatsapp.

Just like on any other instant messaging apps, you can block and unblock someone on imessage especially if the person is a nuisant to you. However, it is very embarrassing and same time very annoying finding out that you have been blocked by someone on Imessage.

This leads us to the question of the day.

Will imessage say delivered if blocked?

This isn’t just applicable to imessage only but other instant messaging apps and the sms text message. Once you have been blocked by a recipient, the message will never go through and this will in turn fail to get delivered.

I’ve seen cases where some will say the recipient blocked me on imessage but still my message was delivered.

I’m telling you that it is not possible and such will never occur. In this type of situation the recipient never blocked you on imessage or probably must have unblocked you prior to you sending the message.

However, you be having an issue with your iMessage. What I’m talking about is blocking someone but in the true sense you haven’t blocked the person and if you send a message to the person it will get delivered.

I’m saying this from what happened to me and I will say it was a message bug.

Again you may have think that the recipient blocked you on imessage simply because previously sent imessages wasn’t going through, but that isn’t always the case. When imessage is not available on the side of the recipient, the imessage will fail to get delivered.

I repeat this once you are blocked on imessage, sent imessages will never say delivered because it will be automatically blocked.

Below is a typical example of imessage delivery failure I’m talking about. 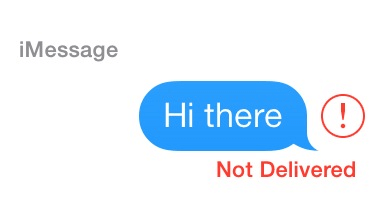 As long as you are blocked on imessage, you will be getting this type of not delivered report below the sent imessage.

Now let me remind of this, it may not necessarily mean that you have been blocked by the recipient that made your iMessage to show not delivered, there are others that will hinder imessage not saying delivered and they are as follows.

It’s very surprising seeing an ios user disabling imessage on it’s ios device, I have seen quite number of persons that did this.

You shouldn’t do that because the recipient might have disabled imessage on it’s iPhone or iPad.

Now if the recipient enabled the sent as sms when imessage is unavailable, the imessage you sent will automatically be sent as sms text message which is green background.

However, if you the sender doesn’t have a texting plan or minutes, then this is where the problem lies because the message won’t be sent as sms as it will automatically fail and what you will see will be not delivered.

You try it all over again and same thing occurred and immediately you concluded that the recipient has blocked you on imessage.

You need to confirm it first before drawing a conclusion.

I recommend you to use any of your friends iphone and send an imessage to the recipient. If it gets delivered then be rest assured that you have been blocked but if not, the recipient imessage isn’t available.

2. Imessage not delivered because of no internet

Another major issue that will prevent imessage from getting delivered is the internet, once there’s no internet in the recipient phone or the sender’s phone, imessage will practically fail to deliver.

These are the the two things that will prevent imessage from being delivered to the recipient.

3. You have been blocked by the recipient

This is one of the most likely reason why imessage always says not delivered, the recipient has blocked you on it’s imessage.

When you are blocked on imessage, all imessages sent to the recipient that blocked you will never say delivered but instead what you will see will be not delivered and which will be below the failed imessage.

I’m saying this to answer the question being asked on if at all will imessage say delivered if blocked. Once again imessage will never say delivered until the recipient unblocked you on it’s imessage.

Can you tell if someone is blocking your texts?

The only way to tell if someone is blocking your text is when your sent texts messages failed to get deliver to the recipient on multiple occasion. It is a strong indication that the recipient has blocked your and as well as your text messages.

No matter how hard you try the text messages won’t get through to the recipient unless you use another phone number.

Does iMessage turn green when blocked?

Imessage doesn’t turn green when blocked, instead you will see not delivered below the imessage. In most cases if you have been blocked on iMessage, it may not necessarily say not delivered but instead it won’t say delivered or read.

Imessage will only turn green when it is not available or you are sending to an android phone user or a feature phone user.

The green message you are seeing is the sms text message which users the sim card and the cellular network service.

Remember that you must enable send as sms when imessage is unavailable to be able to send sms text messages or green messages. This comes in handy if you want to send a message to an android phone user or a feature phone user.

Also someone using an iPhone will also receive green text message if imessage is disabled on it’s iPhone. Make sure to enable send as sms. With this you can send text messages to an android phone users, a feature phone user, or an iPhone user who is not using the imessage.

Do blocked messages get delivered when unblocked?

Blocked messages will never get delivered when unblocked unless you have to ask the sender to resend the messages, then you will receive them in your mobile phone.

If the sender declined to your request then forget about it because you won’t receive the blocked messages.

When blocking a number or a contact in your mobile phone, you should be very much sure that you won’t miss anything from the person. This will help to prevent you asking do blocked messages get delivered when unblocked.

Can you be blocked and it still say delivered?

You can never be blocked and it still says delivered, and kindly note that if it says delivered then be rest assured that you have been unblocked by the recipient.

In some rare cases, you may have think that you have blocked the person but that is not case. Go back to the person’s conversation on your iMessage and opens the person’s info, unblock and block the person once again.

Will a text message say delivered if blocked?

A text message will never say delivered if blocked but instead what you will see on your message status will be sent and this is because the message never get through to the recipient.

Does imessage turn green when blocked

Imessage doesn’t turn green when blocked instead it will show not delivered. When imessage turns green, it simply means that the message was sent as sms and not as imessage.

This is caused when you don’t have an active internet connection on your iPhone, the imessage is not available or the recipient is not using an imessage.

If message says delivered am i blocked?

Do blocked messages get delivered?

iMessage says delivered but not read am i blocked?

If imessage says delivered but not read, it doesn’t mean blocked but rather the recipient haven’t opened or read the sent iMessage.