What is the difference between a sim card and an sd card? As a newbie, this is one of the good questions to ask. At first you may think that they are the same, but they are a lot different.

Don’t get confused because you see “card” at each words, they are two separate function or feature in a mobile phone.

Sim card is a lot more important than the SD card and whereas, high end smartphones no longer feature the microSD card more especially the iphones.

Now back to the topic of the post, what is the difference between a sim card and an sd card. I will explain every bit of them to you.

The main difference between a sim card and sd card is the fact that sim card are used for network connectivity in a cell phone, while sd card is used for data and file storage.

But first, I will explain what a sim card is, and also the microSD card before going into their difference.

A microSD card on the other hand a microSD card is a type of removable flash memory card used for storing information, files or data in a device like the mobile phone, camera, the computer, game console, etc.

Now you have know the meaning of the sim card and the SD card , now let’s move on to the difference between a sim card and an sd card. 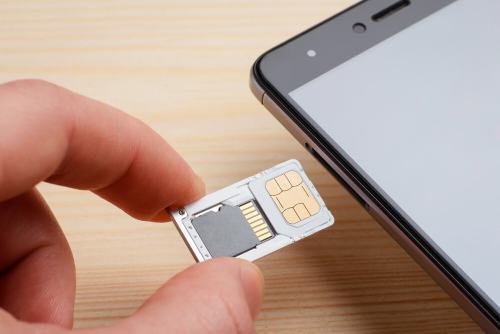 The first major difference between the two is that sim card is used for mobile network, that is to say that through a sim card you can make or receive calls and text messages, browse the internet or store contacts on your phone.

This is where the sd card play an important role in a mobile phone, camera, or devices. You can download files from the internet straight to your microSD card even if the file is big in size.

This is something you can’t do with a sim card, definitely not possible at all. You can only store contacts in the sim card, while you can store files like videos, songs, pictures, documents, etc in an sd card.

Always bear this in mind as the two things mentioned are the major difference between a sim card and an sd card.

It doesn’t end here, as will dig further.

3. You can create an account through a sim card

You can’t open a bank account today without a mobile phone number, you can’t have a whatsapp account without a phone number and as well as telegram.

This aspect doesn’t concern the sd card. While opening a new bank account you don’t have to use an sd card, or even opening a whatsapp account or telegram account.

Is SIM card the same as SD card

Absolutely no, sim card and SD card are not the same. Just like I said, sim card is used for mobile network services, while the sd card is used to store files, documents or data in a device.

This is the major difference between a sim card and an sd card.

Can you put a sim card in a microsd slot

No, that’s not possible. You can’t put a SIM card in a microSD slot as the slots are not the same. The slot for sd card is bigger than the slot for a sim card, and whereas the chips are also different and it won’t be detected.

Don’t bother to try to put a SIM card in a microSD slot, it will fall off and won’t fit or get detected.

Will a phone work without an SD card

For android user’s, the likes of Samsung Galaxy S21 Ultra doesn’t support the sd card, but it works pretty fine without the SD card. A phone can perfectly work without an sd card.

What I did was to move all my entire videos or large files to the OTG USB drive, and free up space in the internal storage.

What I’m trying to you is that you can use a phone without an sd card support, but right now in 2021, I recommend you to get a phone with a large internal storage and also an OTG if the case may be.

Right now you have known the difference between a sim card and an sd card, remember the main difference is that a sim card is only used for mobile network, while an sd card is used to store files in a device.

This is where i come to the conclusion of this post on what is the difference between a sim card and an sd card. I’ve tried to explain this post in a simpler way, and for all to understand and comprehend.

Thank you ~. great information for everyone.!